Not all corals want sun and warm water! 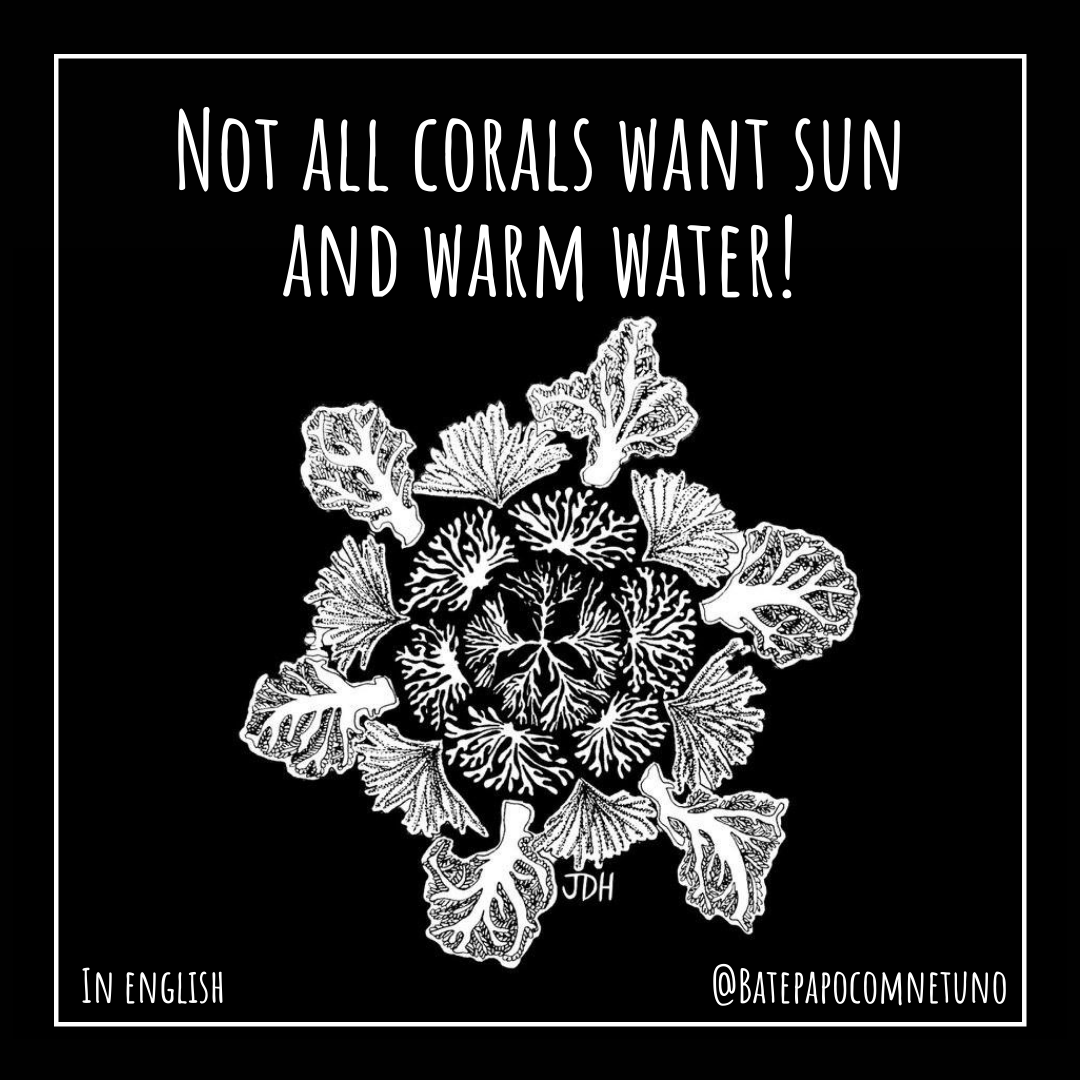 When you think about corals, what images come to mind? I bet they’re of coral reefs in warm, clear and shallow waters, like the ones in the Great Barrier Reef in Australia. Well, I’m here to tell you that not all corals are like those!

Corals are commonly associated with tropical and shallow environments, but other kinds are also present in our oceans, including cold-water corals and deep-water coral

The existence of cold corals has been known since the eighteenth century, however, only within the last few decades have we become aware of the abundance of distribution of these corals, thanks to the growing field of deep water exploration and submersible and acoustic technology.

The name of these animals refers to the environment that they’re found in, characterized by water temperature between 4° and 12° C and at a depth of 50 meters, in high latitudes, to about 4000 meters close to the tropics. The cold water corals are azooxanthellate cnidaria, meaning they don’t live with the symbiotic algae typical of the shallow and tropical corals. These algae, called zooxanthellae, are what make photosynthesis possible to warm water corals. Since the cold corals live in areas of very low or no light, photosynthesis is impossible and there is no reason to associate with zooxantels. Instead, cold corals feed by filtering organisms and organic matter from the water around them (bacteria, protozoa, zooplankton and phytoplankton).

Deep water corals can be subdivided into four categories: 1) stony corals or Scleratina, that build reefs; 2) soft corals or Octococallia, that do not have a carbonate skeleton and cannot form reefs, 3) Black corals, which are exclusively found in deep water, and 4) hydrocorals, which alternate between polyp, fixed structure, and medusa phases, like a jellyfish.

It is not yet possible to make significant estimates of the biodiversity associated with these organisms. However, some studies in the Northeast Atlantic point to more than 1300 species living amongst cold corals. This diversity in corals and associated organisms is comparable to that found in tropical reefs. A big difference between the two environments is that only about 10 species of deep corals form permanent structures, leaving behind the so-called true reefs when the animal dies. In warm waters, there are more than 800 species of corals that help build the reef. In Brazil, there are currently 56 registered species of cold corals so far, with Lophelia pertusa and Solenosmilia variabilis being the most abundant.

Deep-water corals are restricted to oceanic and relatively cold waters; we still do not have a complete view of their global distribution, which depends a lot on research efforts carried out in different regions of the planet.

In other words, the extremely low record in large areas of Africa and South America does not necessarily reflect the absence of these organisms in such places, but rather the few research efforts. Despite the apparent uneven world distribution, new discoveries are constant, and today it is believed that, until a few years ago, scientists underestimated the size of cold reefs.

With advances in research, it was already possible to notice some patterns in the distribution of these organisms. The distribution of Scleractinia corals (hard corals) depends mainly on the carbonate chemistry in the water, and for them to exist they must be above the saturation horizon of aragonite (ASH - Aragonite Saturation Horizon, which determines the maximum depth at which we can find this carbonate before it dissolves in water). This helps explain the abundance of records in the Northeast Atlantic, in which the estimate ASH is 92000 meters in depth, meaning that it includes the whole water column. It also explains the absence of reefs in polar areas and in the North Pacific, where ASH is shallow, between 50 and 600 meters in depth, therefore the fauna is dominated by soft corals, as shown in image 2b.

In addition to depending on the presence of aragonite, cold corals are also associated with primary production on the surface, that is, the production of organic matter and its transport to deep waters, as a high production on the surface means availability of food for these organisms at the bottom. Thus, cold corals are present in places with rapid bottom currents, or in areas far from the coast where waves and tides lead to an increase in the arrival of food for these organisms.They are also found around seamounts, where the dynamics of currents trap nutrient-enriched waters on the banks, favoring the development of deep corals. This is what happens, for example, in the Porcupine Banks and Darwin Mounds, in the Northeast Atlantic, where there is record of organic matter of easy assimilation, like lipids and polyunsaturated acids, up to almost a thousand meters in depth.

The apparent dependence on localized circulation patterns, as in seamounts, tends to limit the dispersion capacity and favor many cold-water corals to be species exclusive to a certain area, what scientists call endemism. For example, a recent study in the Southwest Pacific resulted in 34% of the species seen as new and potentially endemic.

Just like tropical coral reefs, deep reefs develop after an initial settlement of the larvae on a hard substrate. As the structure grows, other organisms are attracted by the potential habitat and the reef grows as new polyps establish themselves on it, using the skeleton of the oldest portions, which makes these structures last a long time. However, little is known about the reproduction of cold water corals. Some theories argue that seasonal food flows, linked to the seasonal blooms of phytoplankton on the surface, would influence carbon transport and provide the ideal periodic conditions for the reproduction of cold corals. Nevertheless, much research is still needed in this field, and, in this sense, ongoing studies with molecular markers seem promising.

There is still a lot to study about cold water corals to be able to determine what can actually threaten these organisms. So far, we are aware of three orientations: bottom trawl fishing, oil or gas exploration and ocean acidification.

Their high vulnerability is due to their way of life, so that all cold water corals are extremely fragile and vulnerable to physical disturbances. As they are linked to a fauna and flora of high economic value, they cannot escape heavy trawl drag or sea currents full of pollutants or sediments that can be deposited, causing the polyps to clog.

There is evidence of major impacts on cold corals through trawling activities, especially at high latitudes, where these corals are not so deep. Ideally, until the dimension of the impacts are better known, the precautionary principle should be adopted and fishing in such regions should be limited. After all, in the whole world, trawling is proving to be a factor of great habitat destruction, and when it is focused on deepwater fishing it can be even more harmful.

The greatest potential threat to deep water reefs, however, is the same to tropical reefs: ocean acidification. Although studies have not yet been conducted exclusively on cold water corals, it is known that the carbonate saturation limit for deeper waters would change by up to hundreds of meters, causing a huge loss of habitat for these organisms.

Finally, there is a need to rapidly increase research on cold corals, especially in the Southern Hemisphere. Although the conditions for such studies are expensive and unfavorable, the potential importance of these habitats is increasingly clear in the biological, chemical and geological scopes, reinforcing the need to quickly collect more accurate information.

Beatriz Mattiuzzo, 22 years-old, oceanography undergraduate since 2013 and in love with the ocean since forever. Beatriz is adventurous and she is confident that her biggest adventure so far has begun after starting the studies at the Oceanographic Institute of the University of São Paulo. Beatriz is currently studying cetaceans, focusing on bioacoustics.

Ágata Piffer Braga, 23 years-old, oceanography undergraduate since 2012 at the Oceanographic Institute of the University of São Paulo. Her biggest passion is physical oceanography. Ágata is developing her term paper at the Ocean Dynamics Laboratory, where she is looking into the Santos Bifurcation through new climatology.

Beware of biodegradable plastics: you may be fooled!

How the melting of glaciers can affect the oceans and climate